Fiery Arrow in association with Live Encounters
invite you to

READING THE LINES A 1916 Commemorative Event
at Tallaght Library

Readers will include Platform One & Guests
Music courtesy of Tony Bardon

Refreshments will be served. 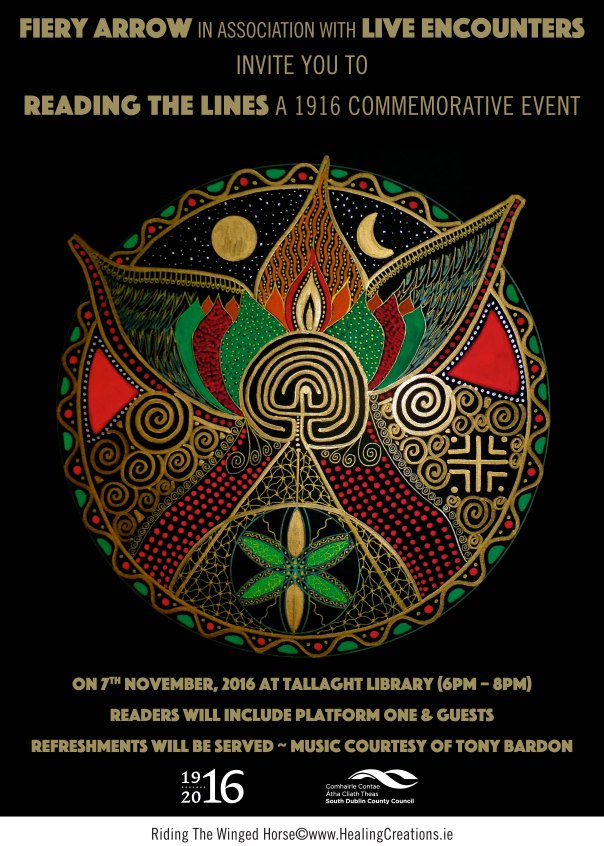 “The idea behind Reading The Lines derives from William Butler Yeats’ Easter 1916. Poets  were invited to choose a line from this iconic work which resonated for them, either culturally, politically or historically. The chosen line was then given a new lease of poetic life, forming a transitional bridge from the now of 2016 to a century ago and the events which led up to or followed on from Ireland becoming a Republic.”
– Eileen Casey, Irish Poet and Writer

As promised – details of the official launch of Circle & Square!

CIRCLE & SQUARE
An anthology of prose, poetry and fiction, inspired by ‘shopping centre’ as a place brim full with dramatic possibility. It includes work from a number of guest writers, including (in alphabetical order):

“To open Circle and Square is like entering the sort of fascinating cafe which every shopping centre should ideally possess: a cornucopia of engaging voices and fascinating stories that any reader would happily eavesdrop on. Eileen Casey has deftly knitted together a compelling ensemble of poets and pr 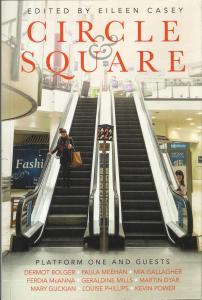 ose writers whose stories complement each other, as they ripple outwards in increasingly imaginative circles to explore the multitudinous facets of everyday living. This is an anthology where a shopping expedition or a Luas journey can also bring you on a succession of intriguing and inventive voyages into the past and future. Prepare to be entertained.”
– Dermot Bolger

Looking forward to catching up with you for what promises to be a wonderful launch which will include poetry and prose readings from a number of writers included in the Circle & Square anthology!

So please spread the word …

Invite you to celebrate the launch of:

A Fascination With Fabric

“Eileen Casey has a rich and evocative style which she delivers with great subtlety.”
Hugo Hamilton

“A reliable witness, Eileen Casey’s work is marked by such a deliberate grace and reverence for the senses.”
Thomas Lynch

Arlene Hunt’s dark and atmospheric stories perfectly capture the grimy underworld of Dublin and beyond. She is the author of a series of fast-paced crime-thrillers, featuring John Kenny and Sarah Quigley from Quik Investigations. Her sixth novel Undertow was nominated for best crime novel of the year in 2009. Her current novel – a stand alone set in the US – entitled The Chosen, was voted as TV3’s Book of the Month for November 2011.

Susan Condon is currently editing her debut novel – a crime fiction thriller set in New York City. Her writing career began in 2008. She has won many short story awards and was Longlisted in the RTE Guide / Penguin Ireland Short Story Competition 2012.

Whether you are a crime fiction reader or currently honing your skills as a crime fiction writer, this is an event not to be missed. An opportunity to delve into the minds of three prolific writers as they divulge the secrets (we hope!) to their success and how they manage to get into the minds of their characters: the victims and the killers . . .

Hope to see you there!

Curious Broadcast is a radio station and production company who work with people to exchange knowledge through audio and video productions.

I was delighted when my short piece, Secret Librarian, was chosen by Sue Hassett to be included in the Red Line Writing as part of South Dublin Libraries Red Line Book Festival last year, along with fellow writers and poets.

This is a reading of new work by writers from South Dublin, presented in diverse voices by actors from Inchicore College, Carousel Theatre School and Clondalkin Youth Theatre. To have your work read by a professional actor, while you sit in the audience of The Civic Theatre, is, I can assure you, quite a thrill.

Head over to Curious Broadcast and take a moment to listen to the diverse work delivered on the night. Secret Librarian can be found at 00:22:18 but if you have time, I’d encourage you to listen to them all – you won’t be disappointed.

As part of the 5th Dublin Book Festival I headed to Smock Alley Theatre, along with fellow writing.ie Crime Scene Book Reviewer, Mick Halpin, to be inspired! 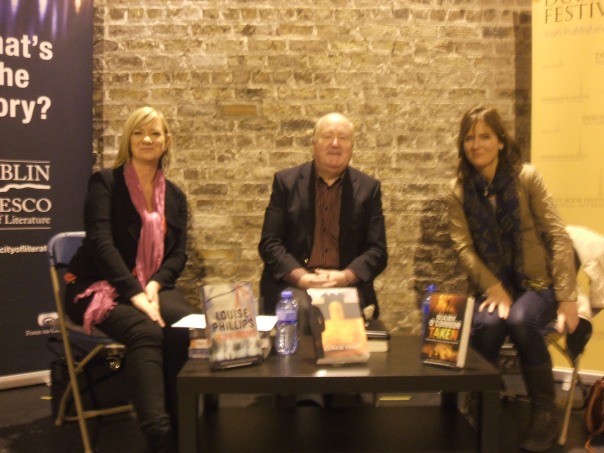 Inspiring Crime Writers was chaired by Louise Phillips, author of Red Ribbons, and her guests on the night were Niamh O’Connor and Conor Brady.

Niamh is the author of three crime novels; her latest, Too Close for Comfort. She is also the true crime editor for the Sunday World.

Conor published his debut crime novel, A June of Ordinary Murders, earlier this year. He was formerly editor of The Irish Times.

Interested in my findings? You’re just  one click away to read my report on the night, over at Crime Scene on www.writing.ie

What a privilege – to be asked to chair Three Voices/Three Forms and showcase three such diverse and talented writers!

There could be only one answer – a resounding YES – when I was asked to chair Three Voices/Three Forms at the Loose End Studio, Civic Theatre last Wednesday.

As part of the Red Line Book Festival 2012, this was a platform to showcase three very diverse, but equally talented writers:

Each writer read extracts from their work – Colm from his poetry, Don’t Go There; Eileen from her short story collection, Snow Shoes and Louise from her crime bestseller, Red Ribbons, along with a tantalizing taster from The Dolls House.

After their Readings I had an opportunity to ask each writer a couple of questions about their writing before opening up to the floor where the fun really began.

You only had to look at the audience to see how much they enjoyed listening to these wonderful writers and from the photo’s it certainly appears as if Colm, Eileen and Louise enjoyed the night too!

November is a jam-packed month full of events to keep all avid readers and aspiring writers busy!

And I am delighted to have my short story, Secret Librarian, included, along with pieces from fellow Platform One Writers – Michael Whelan and Doreen Duffy in the:

New work by emerging writers based in and around RUA RED will be read and performed by actors from South Dublin theatre and film groups in a collaborative and inter-generational showcase event led by writer Sue Hassett and actor Rachael Dowling.

Presented by actors from :

From 7pm to 8pm, before the Three Voices/Three Forms event, ticket holders are offered 15% discount in the RUA RED café.
*Curious Broadcast is a broadcasting space where communities and individuals can exchange and generate new ideas and imaginings for social change. www.curiousbroadcast.com

In celebration of the Red Line Festival, Whitechurch Library hosted a poetry afternoon on 15 November.  The guest of honour was the well known poet, Enda Wyley.

What a wonderful night, at the Saggart Arts Centre, for the Jonathan Swift Creative Writing Awards Ceremony.

Jam-packed with so many fellow writers the night got off to a lively start with music from Tony Bardon.

Maria Wallace, Hennessy Award winning poet, was the judge who offered her congratulations to all of the entrants who had their poems and prose short listed.

It was an especially enjoyable night for me when two great writer friends were awarded, in the Poetry category:

To be awarded First place in the Prose category made the night even more memorable.

The evening finished with a customary Irish cuppa, courtesy of Mervyn Ennis and his lovely wife, giving everyone a chance to have a chat.

Who could possibly argue with Louise Phillips, author of Red Ribbons, when she compared us – Joe McCoubrey, Mick Halpin, Triona Walsh and little ‘auld me – as similar to the X Factor panel!  Just as discerning – and possibly even more dangerous – all of this in our roles as part of the Crime Scene Book Reviewer Panel over at www.writing.ie . . .

As avid readers, I know this is a role we will all enjoy immensely.

You can find a number of my reviews below to whet your appetite:

The Lost by Claire McGowan

In The Darkness by Karin Fossum

The Chosen by Arlene Hunt