Writing.ie is an online magazine for writers and readers of all ages. Developed and run by Vanessa O’Loughlin, a lady with many hats; publishing consultant, literary scout, writer and Vice Chair of the Irish PEN to name but a few; it is a haven for book lovers of every genre, who will find plenty to keep them coming back for more.

As part of the Crime Scene Team – the brainchild of writer, Louise Phillips – I have had the opportunity to interview a few of the many crime fiction writers I admire. Just in case you’ve missed one of your favourites, I’ve compiled them here:

Hope you enjoy getting an insight into how and where each of them write to deliver such fabulous crime fiction that we get to devour in a matter of days!

Dublin born, Alan Glynn, is a graduate of Trinity College, Dublin. He has written three 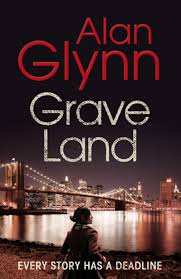 previous novels: Winterland, described by John Connolly as ‘timely, topical and thrilling’, Bloodland, which, according to the Sunday Independent is, ‘a cracking conspiracy thriller worthy of Le Carré’ and his debut, The Dark Fields, which was released in 2011 as the movie Limitless, and went to number 1 at the box office on both sides of the Atlantic.

His latest novel, Graveland, released this month, is the final part of a loose-trilogy of conspiracy thrillers. A Wall Street investment banker is shot dead while jogging in Central Park. Later that night, one of the savviest hedge-fund managers in the city is gunned down outside a fancy Upper West Side restaurant. Are these killings part of a coordinated terrorist attack, or just coincidence? Set deep in the place where corrupt global business and radical politics clash, Graveland is the explosive thriller of, and for, our times.

I had arranged to meet Alan Glynn at his Dublin home. He arrives to the door; phone in hand, as he deftly finishes one interview, ready within moments to begin another. He’s a natural. It was a pleasure to sit over a welcome cup of tea, surrounded by books, as he chats easily about his writing career, movie deals and his time spent in New York.

You can catch the full interview over on writing.ie by clicking here.