A touch of romance and a little humour in preparation for Valentine’s Day.

Serialised and published in InTallaght Magazine, 2011/2012

The warm glow emanating from the window of the Luas was far brighter than the January midday sun outside. Four beaming teenagers chatted and giggled as they headed towards The Square for their weekly shopping fix. Fellow passengers found their eyes drawn towards their perfectly coiffed hair and their sparkling Hollywood smiles which matched the whites of their eyes beneath the false eyelashes and layers of black eyeliner.

The Luas stopped and more commuters boarded. As the doors slid closed, the crowd pushed their way towards the few remaining seats.

The four teenagers; Lauren, Sarah, Kate and Debbie nudged each other, while they pretended to look out the window at the blustery day.

“Put your shades on and take a look at who’s on board – none other than – The Tan-Tastic Four!” Luke said loudly.

Johnnie’s eyes scanned the nearby seats, eventually resting on the four cringing girls. He did his best to keep a straight face, his eyes crinkling up, while he coughed into his hand. All around commuters smiled and sniggered.

The Tan-Tastic Four cringed in their seats, staring out the window. Their blushes appeared to fan the flames of their tans to make them even brighter.

Two stops later and the four girls were the first to exit the Luas and head towards the haven of The Square. They didn’t say a word as their tanned bodies stomped beneath the bright fluorescent lights. They arrived at their favourite store and rummaged through the rails of clothes. For once, not even noticing the Saturday bargains on offer.

“The cheek of that Luke Connors!” said Lauren, “how dare he! He goes around with his long, lanky hair and thinks he can make a show of us, and of course John just had to be with him when—“

“What does he know about tans or looking good?” said Kate, putting an arm around her friend. “Although, maybe we were a little heavy-handed,” she sighed, looking down and grimacing at the dark brown patches around her right elbow and blobs of darker tan on her knuckles. The Tan-Tastic Four looked at each other and they all began to laugh hysterically.

“I think this calls for a strawberry milkshake and a new beauty regime,” said Sarah.  Three orange faces nodded up and down in agreement.

Lauren slammed the front door and ran up the stairs.

“I’m home gran,” she shouted down, hoping that the old lady might be dozing in front of the TV.

“Come on in and tell me about your day,” called her gran from the bottom of the stairs.

Lauren sighed, “just give me a minute, I’ll be down now . . .”  Taking a last look in the mirror she cringed, forget about getting browner – I’m just getting oranger by the minute, she thought.

Her brother Ben, burst into her room, “mam says you’ve to make gran a cup of tea when you . . .”  Ben started to cough, “who’s been tango’d then?” he staggered from the room, bent over, eyes streaming with laughter.

She could hear the sounds of her grandmother filling the kettle.

“I’ll be down now gran,” she shouted, pushing past Ben and walking slowly down the stairs.

She braced herself for the comments as she took two mugs from the cupboard.

“Why don’t you get the chocolate biscuits from the secret stash and I’ll make us both a nice cup of coffee, the way my mother used to make it,” said her gran, taking the mugs from her and filling one of them with full-fat milk.

Lauren, needing no further encouragement, rummaged inside the slow cooker, pulling out a packet of chocolate biscuits. She didn’t know why her mother had a ‘secret stash’ because everyone knew where it was. She watched as her grandmother poured two mugs of milk into a saucepan and turned the heat up high. Hot milk, she thought, I don’t think I’m going to like this!

“Kids aren’t really supposed to drink coffee I suppose, but a little of what you fancy, once-in-a-while, isn’t going to kill you,” said her gran, smiling. Lauren had never noticed before how blue her eyes were, nearly the same blue as the Sunday-best china she used every week when they went to visit.

“The tip is to pour a little of the milk back into the mug, mix in the coffee and sugar and pour it back into the saucepan. Then bring it to the boil, stirring all the time.”  She whisked the saucepan from the hob just as it looked ready to boil over and poured the steaming coffee into the two mugs.

“Right, let’s go Lauren, you bring the coffee and I’ll bring the biscuits. I have a brilliant movie just about to start, The Big Sleep starring your namesake Lauren Bacall, – I guarantee you’ll enjoy it.”

“Please say it’s not one of those old black and white movies that you and Mam love.”

“But Lauren, you don’t even notice that they’re black and white after the first ten minutes. Try it, even just long enough to have your coffee, and see what you think.”

Lauren blew on her coffee as she watched the old movie – she had to admit Lauren Bacall had something; the husky voice, the mannerisms and even the clothes were quite cool too – for ‘back-in-the-day!’ She dipped a chocolate biscuit into the hot mocha liquid and let it melt on her tongue. It tasted really good. 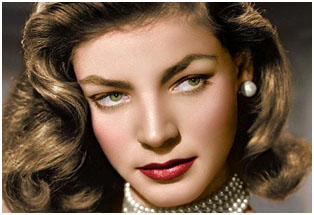 Her gran dabbed her eyes with a tissue, “what do you think?” she sniffed.  “She married her co-star, Humphrey Bogart, you know.”

“I don’t know about the music gran, but it’s not a bad movie, and you’re right, you do kinda forget about it being black and white after the first few minutes.”

“I’m home!”  The door opened and her Mum stuck her head around the door.  “Ah, great movie, Raymond Chandler’s first novel, did I ever tell you we named you after Lauren Bacall?”

Lauren nodded, smiling, “only just about every time you watch an old black and white movie, but I hadn’t realised how cool she was.”

“Like I said, your namesake,” smiled her mam, as she sat on the arm of her chair and kissed her on the head. “I used to copy her make-up, a real case of ‘less-is-more’, but she had that look off to a tee. Look at her perfect complexion, the matt lipstick making the perfect pout and those eyebrows.”

Lauren looked up to see if her mother was inadvertently making a reference to her latest tan fiasco, but she was sitting forward staring intently at the TV.

“And I can’t believe you’re crying, Mam. Thank God it’s not that old Bette Davis movie you loved,” she clicked her fingers, “remind me to get a bucket for your gran and waterproof mascara for us, when we watch that one. What was it called, Bette Davis was a governess and there was a French guy, Charles Boyer, I think . . .”

“All This and Heaven Too. They don’t make them like that any more,” her gran sniffed.

February rolled in and another Saturday morning found Lauren, Sarah, Kate and Debbie aboard the Luas. They noticed a few admiring glances from other commuters as they sat and chatted animatedly.

“Typical, we’re all looking good and no-one worthwhile to see us,” sniffed Debbie, flicking her glossy mane back from her shoulders.

Kate pouted, “and who, exactly, do you mean?” she asked.

Debbie ignored the question, instead pulling a DVD from her bag and staring intently at the cover. “You know, your gran is alright Lauren. Great idea for make-up tips with these old movies, and the movies actually aren’t too bad either,” she said, as she glanced down at Deborah Kerr on the cover of From Here to Eternity.

The Luas stopped and they headed towards Tallaght Library.

Lauren scanned through the DVD’s. She could see Debbie in the distance, as she tried unsuccessfully, to return her DVD on the self-service scanner. She groaned inwardly as she saw Luke heading towards her. Debbie would be in foul humour later – she hated to look anything but cool. It had been hard enough to talk the girls’ into going to the library in the first place! Not that they minded now, she thought, after they’d seen it wasn’t just books and that they also had a huge selection of DVD’s and CD’s at the end of their perfectly manicured fingertips.

Debbie turned to see Luke heading towards her. He did a double-take, “em, here, I’ll, eh, I’ll do that for you,” he stuttered, shooting bright red. x

Lauren reached towards The African Queen, but an arm brushed against her shoulder and snatched the DVD from the shelf. She turned to see John smiling at her.

“Didn’t think that would be your kinda movie,” he drawled, handing it to her.

“For my gran. I didn’t think that would be yours,” she laughed, as she noticed the copy of True Grit in his other hand.

“For my dad. When I’m borrowing books for college I usually pick him up one of his favourite movies. He’s a John Wayne fan,” he said, waving the DVD in the air. “It could have been worse I suppose, it could have been Bogart!” he said, nodding towards The African Queen with a grin.

Lauren laughed, “I don’t think you quite have the look of a Humphrey,” she said, tilting her head seductively, while arching a perfect eyebrow.