You are invited to the launch of:

A chapbook of Poems and Stories from the 2019 Red Line Book Festival Residency.

This dream team, steered by Lisa Harding, were the participants of the Red Line Book Festival inaugural Writer in Residence project. Come along to this free event where you can hear the writers and poets who participated in the project read from their work.

A collection of responses to the poetry of Patrick Kavanagh edited by Eileen Casey and including work from many poets, including:

“The poet Patrick Kavanagh 1904-1967 would take enormous pleasure in having a standing army of poets and writers pay tribute to his work in this handsome and original publication. Eileen Casey has grasped the initiative, outcome of personal talent and imaginative enterprise, to honour one of our greatest national poets in this magnificent collection on the fiftieth anniversary of his death.”
– Dr Una Agnew

Ian Rankin is one of the world’s greatest crime writers, creator of the hugely popular Inspector Rebus novels, as well as a string of standalone thrillers, and we are delighted to welcome him for a first visit to Pavilion Theatre.

Even Dogs in the Wild, the twentieth Rebus novel, brings back Ian Rankin’s greatest characters in a story exploring the darkest corners of our instincts and desires.

When DI Siobhan Clarke investigates the death of a senior lawyer, she discovers a link to a local gangster, and enlists the help of recently retired John Rebus. Meanwhile, an anonymous killer stalks the night streets, focussed on revenge. It’s a game of dog eat dog, in the city as in the wild.  Vintage Rankin – not be missed.

Take A Step Towards Your Dreams!

This unique conference offers a road map
for you to achieve your full potential as a writer in the 21st century.

Enjoy a weekend in Dublin – an exciting and historic literary city – while traditionally published authors,
with industry experience, give you the inside story on this rapidly changing industry.

Ideal for both fiction and non fiction authors, this conference will be hosted at the Irish Writers Centre in the heart of Dublin and sponsored by BooksGoSocial.com, the leading global online book promotion service and will consist of:

The line-up of conference speakers include:

Laurence O’Bryan
(founder of BooksGoSocial.com, published in 11 languages, Harper Collins & other)
teaches digital marketing at diploma level, has been training authors in digital marketing for 4 years and is also a published author. He spent ten years trying to break into the publishing industry and finally won a contract after starting a blog and launching a Twitter account in 2009.

Margaret Murphy
(Bestselling & Award Winning British Crime Writer & Writing Craft Instructor)
has published nine critically acclaimed psychological thrillers under her own name – in the UK and the USA, as well as in translation across Europe – receiving accolades from newspapers including The Times, Guardian and Telegraph in the UK, and starred reviews from both Publishers’ Weekly and Booklist in the USA.

Jessica Page Morrell
(Editor, author of a variety of acclaimed writing craft books and regular U.S. writing craft conference speaker)
understands both sides of the editorial desk–as an editor and author. She is the author of Thanks, But This Isn’t For Us, A (Sort of) Compassionate Guide to Why Your Writing is Being Rejected; Bullies, Bastards & Bitches, How to Write the Bad Guys in Fiction; The Writer’s I Ching: Wisdom for the Creative Life; Voices from the Street; Between the Lines: Master The Subtle Elements Of Fiction Writing; and Writing Out the Storm.

is a writer and photographer now living in the south of France. Since 1988, she has published eighteen books in a wide variety of genres, both with traditional publishers and self-published. A member of the Welsh Academy and Writers on Tour scheme, Jean has led writers’ workshops for all ages and abilitites/disabilities.

Catherine Ryan Howard
(Leading European self-publishing expert and social media consultant)
is a writer, self-publisher and caffeine-enthusiast from Cork. She started self-publishing in 2010 with the release of her bestselling travel memoir, Mousetrapped, and is known for the pragmatic self-publishing advice she shares on her blog, Catherine, Caffeinated. Since 2012 she’s worked with Penguin Ireland, helping them devise and execute their commercial fiction social media campaigns.

had a long career as a journalist and PR professional. Having self-published two collections of short stories, Debbie is now writing her first novel. Her non-fiction books include the Alliance of Independent Author’s (ALLi) guidebooks. She also helps drive ALLi’s campaigns, launching #PublishingOpenUp at the London Book Fair in 2014 and #Authors4Bookstores in 2015.

Dublin is the UNESCO City of Literature:

The city of Swift, Joyce, Beckett, Yeats, Wilde, Synge & Shaw
as well as the modern masters: Edna O’Brien, Roddy Doyle, Colum McCann and a dozen others.

There’s plenty of events to keep all avid readers and aspiring writers busy and plenty more to come. Check out a selection below: 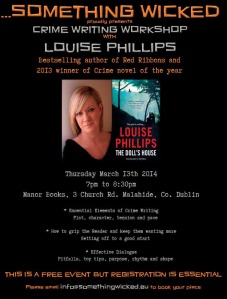 Louise Phillips is the bestselling author of Red Ribbons and 2013 winner of Crime Novel of the Year for The Doll’s House.

This free workshop will cover all aspects of crime writing including: plot, character, tension, effective dialogue and so much more.

Click the poster for more information, including registration details.

Smock Alley are delighted to announce another event in their ongoing series of author talks with neighbours, the Gutter Bookshop.

Join them to celebrate the launch of the twelfth Charlie Parker thriller, The Wolf in Winter. John Connolly will be joined by musicians Jonny Kearney and Lucy Farrell in what promises to be a unique and thrilling evening. There will be a book signing after the event in The Gutter Bookshop.

Trinity College Dublin and Glucksman Ireland House, New York University are holding a festival devoted to Irish crime fiction, featuring more than a dozen of the most exciting Irish crime novelists. This will be a memorable weekend, devoted to a key genre of contemporary Irish writing, so please make plans to join us.

We’re particularly pleased to announce that our weekend will conclude with a major event: for the Irish launch of his newest novel, The Gods of Guilt (Orion Books, November 2013), Michael Connelly will be interviewed by John Connolly. After the interview, and questions from the audience, Michael will be signing books, which will be for sale on the evening. Tickets are required for this final event, and they are €6 (inc. fees) from eventbrite.com.

From the time she was born, Emma Byrne was different from other children. Shy and reclusive, her world revolved around animals, so much so that by the time she was 15, Emma was a much sought after horse trainer.

So who would try to harm this gifted young woman? Who was shooting in Crilly Woods on that fateful August day?

Emma’s twin brother, Anthony, is determined to get to the bottom of what happened to his sister, and in the course of his investigations makes a terrible mistake, one that will change all their lives forever.

The Outsider: sometimes those who love us most hardly know us at all.

Ireland’s leading performance poets take you on an emotional journey about what it really means to be a man. With Stephen James Smith, Colm Keegan & Kalle Ryan.

“…each of the men brings their own energy, tone and distinct poetic style to the composite structure…”**** The Irish Times

This event is supported by Poetry Ireland

Michael J. Whelan is a soldier-poet, historian and United Nations veteran. Michael writes powerful, emotive poems of witness, tragedy, friendship & loss brought like baggage from war zones through which many Irish soldiers have passed; he is a voice of moments in the past.

In, Against the Black Sky, We Listen, he writes poems inspired by his experiences and memories as an Irish soldier with the peacekeeping forces during the conflicts in Lebanon and Kosovo.

Michael will read from his collection of poems placed 2nd in the Patrick Kavanagh Poetry Awards 2011, some of which have been published in New Irish Writing 2013 and other literary journals.

Arlene Hunt’s dark and atmospheric stories perfectly capture the grimy underworld of Dublin and beyond. She is the author of a series of fast-paced crime-thrillers, featuring John Kenny and Sarah Quigley from Quik Investigations. Her sixth novel Undertow was nominated for best crime novel of the year in 2009. Her current novel – a stand alone set in the US – entitled The Chosen, was voted as TV3′s Book of the Month for November 2011.

Susan Condon is currently editing her debut novel – a crime fiction thriller set in New York City. Her writing career began in 2008. She has won many short story awards and was Longlisted in the RTE Guide / Penguin Ireland Short Story Competition 2012.

Whether you are a crime fiction reader or currently honing your skills as a crime fiction writer, this is an event not to be missed. An opportunity to delve into the minds of three prolific writers as they divulge the secrets (we hope!) to their success and how they manage to get into the minds of their characters: the victims and the killers . . .

Hope to see you there!