The Truth About The Harry Quebert Affair: Joël Dicker 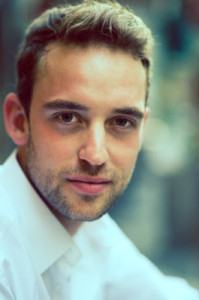 The Truth About The Harry Quebert Affair, written by Joël Dicker and starring Patrick Dempsey (of Grey’s Anatomy fame) will soon, courtesy of MGM, hit our screens.

Under Jean-Jacques Annaud’s direction, Dicker’s entire novel will be brought to life over ten episodes. This is a similar approach taken to The Handmaid’s Tale, written by Margaret Atwood and starring Elizabeth Moss, which won a host of Emmy awards.

Back in the summer of 2014, I had the pleasure of interviewing Dicker in Dublin for writing.ie:

Having finished The Truth About The Harry Quebert Affair only days before the interview, I was intrigued to meet Geneva born Joël Dicker, a writer with a novel which belies his mere 28 years. He is hailed as Switzerland’s coolest export since Roger Federer, with rights sold to 45 countries in 32 languages and over 2 million copies sold in less than a year. For me, minus the supernatural element, it was reminiscent of a great Stephen King novel. Dicker laughs when I mention it – apparently, I’m not the first to make the comparison although he has not, yet, read any of King’s novels. I suggest that with his busy schedule he could try Joyland, far shorter than King’s regular books but, in my opinion, up there with some of his very best. Dicker, like King, has a way of bringing his books to life by producing such fully formed characters that you feel as if you already know them personally and you never want to let them go.

The Truth About The Harry Quebert Affair is set in New Hampshire. Here’s the blurb:

Not just a book about an unsolved murder case, The Truth about the Harry Quebert Affair explores the price of fame and the seduction of success, the ferocity of the publishing industry and the power of the media, love in all its forms and what it means to be a truly great writer.

Dicker is currently on a roller-coaster ride, jetting in and out of countries so fast, while promoting his book, that his feet have barely touched the ground. Yet, relaxing over a coffee in the Ballsbridge hotel, he is charming and humble, excusing himself for a moment while he finds a socket to re-charge his iPhone.

This is a guy who has worked hard for what appears to be overnight success. His writing career began at age ten, when he was Editor-in-Chief of a monthly wildlife magazine, and wrote factual articles about animals. Until then he had not considered short stories. “I wanted to feel free to tell the story I wanted, because with the magazine I was only able to write true facts, so I tried short stories.” Dicker admits he finds it difficult to be able to condense a story enough to produce a short story, yet he managed it successfully with The Tiger which won an award in 2005. Some accomplishment for him, he laughs, as he nods towards his current novel, The Truth About The Harry Quebert Affair, which is over 600 pages long. Perhaps another similarity between himself and Stephen King …

At age 24, he wrote The Final Days of our Fathers which won the Prix des Ecrivains Genevois (Geneva Writers’ Prize) for unpublished manuscripts. The novel was subsequently published in 2012. His passion may always have been for writing, but he may well have taken another road when he headed off to an acting school in Paris. “I’ve always really enjoyed writing and playing music and doing some artistical creative stuff.” But Dicker explains, “I always felt the need to have a back-up plan. After six months, I realised I was not made for that. I really felt I should have a degree in something.” I ask if that’s how he ended up studying law. He laughs easily and nods, “I was not very good at literature and horrible at mathematics, so, I chose the only faculty at the University of Geneva that has no literature and no maths!”

We chat about his book and I ask whether his publishers might have requested him to shorten the title. Apparently that was never the case, but they were a little concerned about the pronunciation of Harry Quebert for his English-speaking audience. Dicker came up with a novel way to get over this problem. The waitresses, at the local coffee shop where the great Quebert frequents, are given a lesson by the owner, Tamara, on how to bring his order and on the correct pronunciation of his name:

It does the trick!

With his first novel, Dicker had tried to imagine what it would be like to have his book in the shops, expecting the bookseller to have it displayed in the front window. But unfortunately, back then, that wasn’t the case. Today it is a different story. Wherever he travels he comes across huge posters of The Truth About The Harry Quebert Affair displayed in bookshop windows; most recently earlier today in Dublin. “I feel very, very lucky with this one. Each time I see a window I think of the first book and how disappointed I was.” When I ask where he was when he came across his first novel, he tells me it was “at a book chain in Switzerland called Payot. It’s a terrible memory actually,” he grins, “because the book was supposed to be out on 10 January and I told my friends, ‘go, try to find the book,’ just to make the bookseller think it’s a must-read. But there was a delay in the delivery of the book in France and Switzerland and no-one told me. So I was very disappointed. But then it came out a week after and I finally saw it and I was very happy.”

His love of books was fuelled by his mother who works in a bookshop called, La Librerit. Dicker tells me “it sounds like bookshop but it’s a play on words – to be free and to love.” Directly translated to For The Love of Books, this is a Geneva bookstore with an immense stock of children’s books which no doubt whet Dicker’s appetite from an early age.

Dicker chose America as the setting for his novel, mainly because of the amount of time he spent there as a child. His cousins lived in Washington DC and had a summer house in Maine; an ideal location for them to spend their summer holidays and a feeding ground for Dicker’s imagination.

I ask about Nola, a character loved, it seems, by all who come into contact with her. Dicker tells me that in the beginning, Nola was not in the novel at all. “The very first idea, the first layer, was just a house by the ocean. Then came Harry and then came Marcus and the relationship between them.” Joel goes on to explain his thought processes and how they developed. “I should give Marcus a girlfriend and so that was Nola.” Then he got the idea to change the dynamics, “I tried again, but Nola should be going out with Harry, that’s much more interesting. And then – she could be dead! She could have been murdered, which is even better, so always going one step further and one step further. I’m very bad with plans, I much prefer just to write and let the story unfold.”

Dicker had four novels rejected before he was finally able to find his first publisher, yet when I ask him for the best advice he could offer new writers he appears uncomfortable. “It’s to keep working. I feel out of place giving advice, or anything, maybe in thirty years . . .” he shrugs. “I’m just a very lucky guy.” At book signings, he regularly has writers asking him for advice; he says the only thing he can tell them is to “keep trying. It’s very hard at times, but maybe there’s nothing more than that. Keep trying and try again and again.”

While currently travelling and promoting his novel, Dicker is still “working hard, trying to keep the machine going. Even though I don’t have much time to write a lot, I’ll read some pages – write down some ideas and plot ideas.”

As the interview draws to a close he tells me that ultimately, ”you write to please yourself. You write for an audience, of course. You write because you want to be read; because you want to share your story. But if you tell a story that you don’t enjoy yourself, how can you expect people to read it and enjoy it?”