The Dead House by Billy O’Callaghan

It is said, that to write well, you must read well. So, whether to improve your writing or for the pure enjoyment of a great tale, well-told, place Billy O’Callaghan’s, The Dead House, at the top of your list. 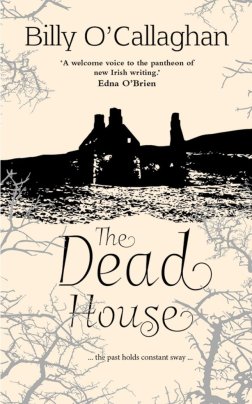 It was while scrolling through www.writing.ie recently that I came across an article about his debut novel that piqued my interest, the title alone creating goose bumps. It was apparent that, at the very least, I’d read a story written by a master short story writer who has honed his craft. He has close to a hundred stories published in literary journals and magazines around the world while still others have won awards including the 2013 Bord Gais Energy Irish Book Award for Short Story of the Year. That’s no mean feat!

So I went in search of The Dead House, published in early May, and on my third attempt managed to secure a copy. It all helped to heighten my anticipation. But finding this beautifully bound novel with its haunting image on any book shelf, I would have been instantly drawn to it. I felt as I had as a child when I came across a book I hadn’t read by one of my favourite authors and settled down to read, with a fervent hope that I wouldn’t be disappointed. I wasn’t.

O’Callaghan delivers a well constructed story which gradually builds to a heart-stopping crescendo. I read this book in two sittings. After the first ninety-five pages I took a breather, sending O’Callaghan a Tweet to tell him how much I enjoyed his book but that I’d probably be too scared to sleep if I read any more. He advised that another fifty pages in and I’d definitely be awake. I should have listened! Except – after another fifty pages – I no longer had the power to close the book. I had to read on. Unfortunately for me, it was close to midnight when I read the final page …

You can read the full review over on writing.ie by clicking here.

About The Dead House:

Attempting to rebuild her life after a violent relationship, Maggie Turner, a successful young artist, moves from London to Allihies and buys an ancient abandoned cottage. Keen to concentrate on her art, she is captivated by the wild beauty of her surroundings.

After renovations, she hosts a house-warming weekend for friends. A drunken game with a Ouija board briefly descends into something more sinister, as Maggie apparently channels a spirit who refers to himself simply as ‘The Master’. The others are visibly shaken, but the day after the whole thing is easily dismissed as the combination of suggestion and alcohol.

Maggie immerses herself in her painting, but the work devolves, day by day, until her style is no longer recognisable. She glimpses things, hears voices, finds herself drawn to certain areas: a stone circle in the nearby hills, the reefs at the west end of the beach behind her home … A compelling modern ghost story from a supremely talented writer.