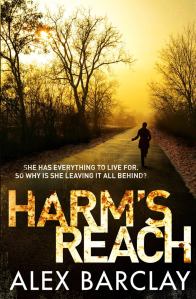 I’ve heard it said that you should never meet your heroes as more often than not you’re likely to be disappointed. Thankfully, with Alex Barclay, that was most definitely not the case!

We first met some years back at an event in Easons, O’Connell Street, and our paths have crossed at numerous writing events since. In The Civic Theatre last year, as part of the Red Line Book Festival, I chaired ‘Ladykillers’ which gave me the unique opportunity to delve into the minds of Alex Barclay, Arlene Hunt, Louise Phillips and former Boulder Coroner (and good friend of Barclay’s), Joanne Richardson. What I found most disconcerting was how angelic they all appear on the outside, while managing to conjure up the darkest of villains and crimes within the pages of their novels.

Barclay is the author of several bestselling thrillers. Her first novel, Darkhouse, was a Sunday Times Top Ten bestseller while third novel, Blood Runs Cold (the beginning of the Special Agent Ren Bryce series) won the Ireland AM Crime Fiction Award at the Irish Book Awards. Harm’s Reach is her sixth adult novel and the fourth in the FBI Agent Ren Bryce series.

Interest in plots and characters (especially villains!) or Homeland or tips for new writers?

Then read the full interview on writing.ie by clicking here.

FBI Agent Ren Bryce finds herself entangled in two seemingly unrelated mysteries. But the past has a way of echoing down the years and finding its way into the present.

When Special Agent Ren Bryce discovers the body of a young woman in an abandoned car, solving the case becomes personal. But the more she uncovers about the victim’s last movements, the more questions are raised.

Why was Laura Flynn driving towards a ranch for troubled teens in the middle of Colorado when her employers thought she was hundreds of miles away? And what did she know about a case from fifty years ago, which her death dramatically reopens?

As Ren and cold case investigator Janine Hooks slowly weave the threads together, a picture emerges of a privileged family determined to hide some very dark secrets – whatever the cost.