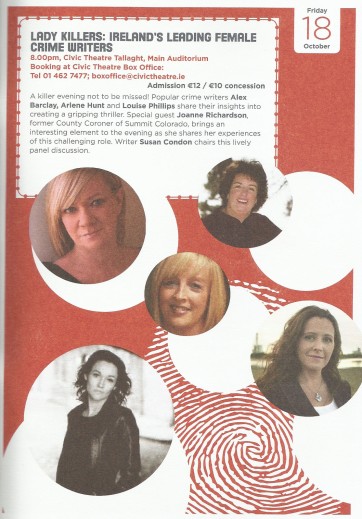 Is crime your thing? Crime fiction, I hasten to add! Then mark Friday, 18th October in your diary and get your tickets for LADY KILLERS: Ireland’s Leading Female Crime Writers at The Civic Theatre before they sell out.

If you’re feeling lucky, you might even manage to WIN two tickets to this wonderful night – read on to find out how . . .

Whether you are a reader or currently honing your skills as a writer, this is an event not to be missed. A unique opportunity to delve into the minds of three prolific writers as they divulge the secrets (we hope!) to their success and how they manage to get into the minds of their characters: the victims and the killers.

Feeling lucky? Enter our free competition to win two tickets to Lady Killers. All you have to do is come up with the most intriguing question – so get your thinking caps on and post your questions here. Deadline for entries is 10pm on Sunday, 13 October. The winning question will be put to the panel, on your behalf, on the night. Better still, why not introduce yourself and ask it yourself – after all, dear winner, your seats are already booked and waiting . . .

Arlene Hunt’s dark and atmospheric stories perfectly capture the grimy underworld of Dublin and beyond. She is the author of a series of fast-paced crime-thrillers, featuring John Kenny and Sarah Quigley from Quik Investigations. Her sixth novel Undertow was nominated for best crime novel of the year in 2009. Her current novel – a stand alone set in the US – entitled The Chosen, was voted as TV3′s Book of the Month for November 2011.

Susan Condon is currently editing her debut novel – a crime fiction thriller set in New York City. Her writing career began in 2008. She has won many short story awards and was Longlisted in the RTÉ Guide/Penguin Ireland Short Story Competition 2012 and 2013.

Don’t forget – the deadline for entries is 10pm on Sunday, 13 October.